Excerpt from “Learner Variability Is the Rule, Not the Exception by Barbara Pape,” Digital Promis Global, May 21, 2019:

Learner variability is the young person who lives in poverty, or is learning to speak
English and may not yet have the background knowledge to enable comprehension of a reading passage. Or, the student who already has the skills to excel at a pace beyond the curriculum and is bored because traditional methods of instruction do not engage her or meet her needs. It is the student who has experienced trauma in a single event or on a day-to-day basis. Learner variability is the learner whose learning difference, color, ethnicity, or gender makes them susceptible to stereotype threat and low expectations. It’s the learner with working memory, decoding, or
attention challenges who retreats into silence or acts unruly out of fear they will be asked a question they are not yet ready to answer…p. 3

Digital Promise is currently developing a follow-up survey that will provide an even deeper understanding and more context on Learning in the 21st Century.

For more information on learner variability:

This Prison Literacy edition of the COABE Journal highlights programs, approaches, and professionals who work with adults currently serving or who have served time in correctional settings. These contributions are intended to generate ideas for effectively providing quality and relevant learning opportunities to those who are “behind the walls” and help them improve their experiences once they transition to life “outside the walls.”

Posted in Department of Corrections

The following information about Immigrant-Origin Adults without Postsecondary Credentials: A Virginia-State Profile – (MPI_USandStateProfiles_AdultsPSCredentials-Virginia)  includes excerpts from a memo from the new Migration Policy Institute (Michelle Mittelstadt, Director of Communications and Public Affairs):

New Migration Policy Institute (MPI) profiles of adults, immigrant-origin and otherwise, without postsecondary credentials for the United States, all 50 states, and the District of Columbia reflect differing realities as policymakers consider investments in improving the skills of workers.

Immigrant-origin adults made up 30 percent of all U.S. adults without postsecondary credentials in 2017. Their concentrations, however, were far higher in some states: 58 percent of all adults in California, 43 percent in Nevada and Massachusetts, and 40 percent in Texas and Connecticut.

In all but two states—New Hampshire and Maine—the overall number of immigrant-origin adults has grown faster than the number of adults with only U.S.-born parents since 2000

The MPI fact sheet, Immigrant-Origin Adults without Postsecondary Credentials: A 50-State Profile, and accompanying data snapshots offer a profile of the 100 million U.S. adults without postsecondary credentials, including the 30 million of immigrant origin, focusing on key characteristics that should be taken into account by public and private credentialing initiatives.

“For state and national economies to fully benefit from the untapped potential of immigrant-origin workers, credentialing initiatives will need to be capable of helping participants overcome a range of labor-market challenges, including by building English proficiency and filling gaps in prior education, as well as honing skills in demand in key sectors,” write researchers Jeanne Batalova and Michael Fix.

The state-level data follows the recent release of a national-level report, Credentials for the Future: Mapping the Potential for Immigrant-Origin Adults in the United States, part of a research project funded through a grant from the Lumina Foundation.

Workplace Readiness: Can It Lead to Better Employment and Earnings for Low-Income Adults?

This brief,by Jacob Hartog, Sarah Wissel, Annalisa Mastri, and Kelley Borradaile discusses 19 interventions identified by the Employment Strategies for Low-Income
Adults Evidence Review (ESER) that featured workreadiness services as their primary employment or
training strategy.2 This brief describes work-readiness
interventions and their impact on employment and
earnings. It also profiles six promising interventions
and their impacts in more detail.

The Employment Strategies for Low-Income Adults Evidence Review (ESER) is a systematic review of the literature on the impacts of employment and training programs and policies for low-income people. Sponsored by the Office of Planning, Research and Evaluation (OPRE) in the Administration for Children and Families, ESER provides practitioners, policymakers, researchers, and the public with a transparent, systematic assessment of the quality of research evidence supporting approaches to improve the employment-related outcomes of low-income adults.

“Low-skilled workers are being left behind as technology shifts the workforce toward the middle-skills level. Educators and policymakers will need to reach these adults with education and training to fill plentiful, well-paying middle-skill jobs in their states. This [2018] fact sheet summarizes trends and state policy concerns.” – SREB (Southern Regional Education Board), November 2018 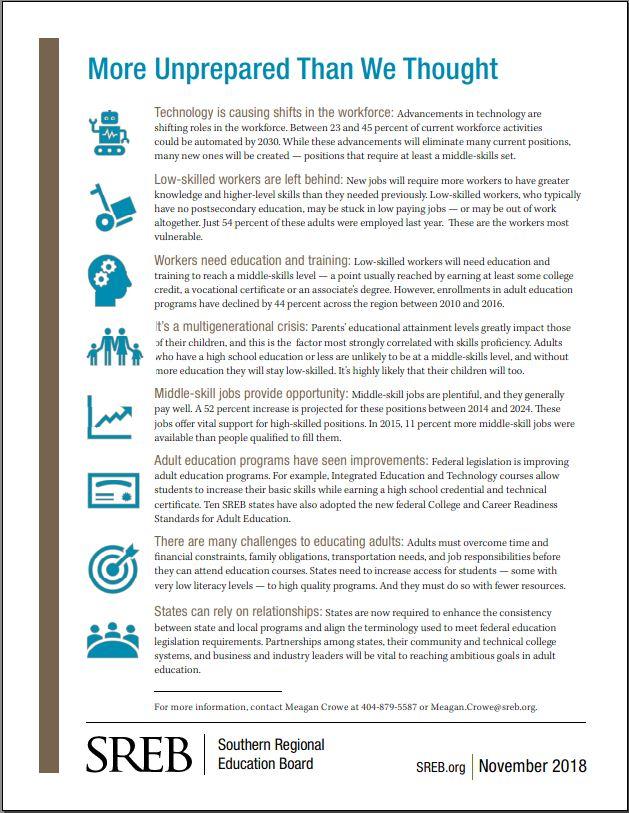 “The 2017 KIDS COUNT Data Book urges policymakers not to back away from targeted investments that help U.S. children become healthier, more likely to complete high school and better positioned to contribute to the nation’s economy as adults. The Data Book also shows the child poverty rate in 2015 continued to drop, landing at 21%. In addition, children experienced gains in reading proficiency and a significant increase in the number of kids with health insurance. However, the data indicate that unacceptable levels of children living in poverty and in high-poverty neighborhoods persist.”

To download the PDF document of the data book, click on this link to 2017 Kids Count Data Book: https://www.aecf.org/resources/2017-kids-count-data-book/

This brief (May 21, 2018), by Wayne Taliaferro and Duy Pham, explains how Ohio is aligning education and training opportunities for people who are currently or formerly incarcerated. This is the third entry in our series “Reconnecting Justice in the States,” which explores coordinated justice, education, and workforce policy and practice at the state level. It is part of CLASP’s continued commitment to leverage criminal justice reform to expand economic opportunity and help achieve racial equity.

About CLASP: The Center for Law and Social Policy (CLASP) is a national, nonpartisan, nonprofit organization advancing policy solutions for low-income people.

Facts and Statistics for Adult Education and Literacy in Virginia and the U.S.
Blog at WordPress.com.